Edit edit edit and the horror of the Logline

Most of my free time these past few weeks have been taken up with editing. Not only have I been polishing the manuscript of Meditations on Murder for the hundredth time but also the drafts of the synopsis and the query letter. These are really difficult exercises in writing. One has to distill the 80,000 words down to one, two or three pages in the case of the synopsis and the query letter is an even shorter and more focused job.

Then of course there is the Logline.  What is a Logline? OK I had to google it too.

A log line or logline is a brief (usually one-sentence) summary of a television program, film, or book that states the central conflict of the story, often providing both a synopsis of the story's plot, and an emotional "hook" to stimulate interest.


So now we have to squeeze out precious 80,000 words down into one line.  It gets better.
That one line has an optimum length of 27 - yes, TWENTY-SEVEN words.  Why 27 words you might ask, it seems such a random number.  Apparently the answer which is all over the internet is not 42 (google it) but - 'it just works' - there you have it the rational for driving writers crazy.
My novel is 79,802 words at the moment. So a 27 word log line constitutes 0.0338% of the total words used. In 0.04% of all my words (I'm being generous to myself by rounding up) I have to use this sort of formula:

'When [flawed hero at start of story] is forced to [call to adventure], he has to [opportunity for emotional growth] or risk [what’s at stake]'.

I used a different approach I found online and workshopped it a little with some other writers online and came up with this:

When a city boy's girlfriend runs off with his best friend he plans to eliminate them but his tactics are hijacked by a ghost with ulterior motives. (27 words)

My query letter is looking good now and is I think pretty strong. Again I have workshopped this with other writers on Facebook and Scribophile

Charlie wants to murder someone. Anybody will do. He wants to be a killer like the men with chiseled looks and sexy five o’clock shadows in the movies. But he’s just a pasty-faced, floppy-haired, rich office clone for the company his family owns.

His psychopathic rage flares to life when his ex-girlfriend, Linda, runs off with his ex-best friend, Ross. So Charlie creates a kill list on his iPhone. His first target is the puppy sleeping peacefully on his bed and he decides on a more challenging second victim to test his resolve and his lust for blood.

But then his iPhone bleeps – a ghost changes the list.

Now Linda and his ex-best friend are on it. The daemon, a 12th century Scottish woman also adds Linda’s parents and her solicitors.

Nye, the spirit, appears on his doorstep wearing his Bob Marley T-shirt – the cheek.  She crossed the barrier from the beyond to save a blood relative who is in grave danger.  Nye haunts Charlie, cooking him breakfast, influencing his decisions about how to kill, and shaping his murderous quest for the sake of her family bloodline.

While on his mission to take lives Charlie crosses paths with Roger le Ferrier a serial killer stalking Nye’s relative, Annie. In an attempt to protect the girl he’s falling for, Charlie has no choice but to forget his own kill list. But then it’s too late – Charlie, powerless to help, witnesses the Annie’s brutal death at the hands of le Ferrier.

The next morning, Charlie finds the murdered girl cooking breakfast in his home.
Another ghost?  Or has he lost his sanity this time?

MEDITATIONS ON MURDER is complete at 79,734 words and is an Adult urban
fantasy.

Dr. Rob Burton has published academic papers and chapters in books, and is the co-author of an IELTS speaking test crammer for Chinese students (with a Chinese Author – ISBN 97873002052989 )

Thank you for your time and consideration.

I've been thinking about my characters and ideas for book covers so have been looking at images online. But I saw this picture in a shopping mall here in Nanjing, China.

This girl seems to have some of the characteristics of Nye my 12C ghost. 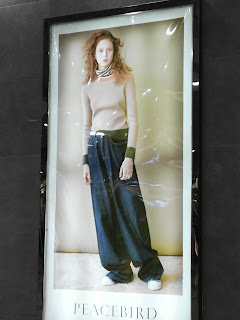