The return of the Alternator 2 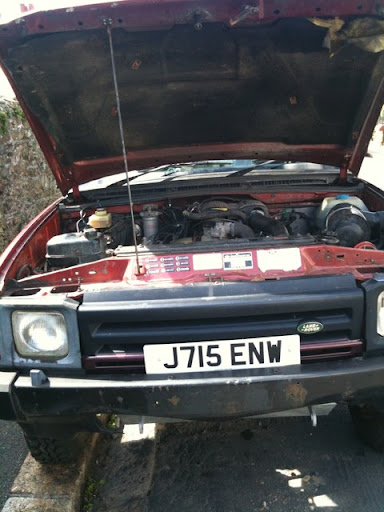 So here's the disco ready for the minor surgery I was preparing to perform on her on Bank Holiday Monday the traditional day for tinkering around with the house or the car.

I had all the spanners laid out and my latex gloves on. First it took pictures of all the important bits

Which I will add here

Then proceeded to remove said Alternator. This is pretty easy procedure although the nuts are a bit fiddly to get to with normal spanners even with a ring end. I need to invest in a set of sockets. (I did have one can't think where they have gone)

One I had taken all the fittings off the alternator still was attached by the wiring. So I took a pic of that too 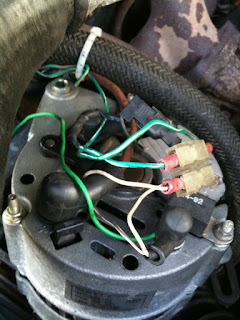 Getting the alternator back on was pretty straight forward.

The whole thing took me about 1hr 20 minutes

Took it up the local quik fit andctheyvtold me the battery wasn't charging and the alternator was only putting out 11 volts. I'm guessing the belt was still a bit loose

So I got it home and tightened the belt BUT despite me topping up the water in the battery it hadn't enough charge to start the motor.

So the story stalls here until I swop the battery from my Rover 416 to see if I have cured the alternator problem but have got a duff battery !
Posted by Rob Burton at 9:35 pm No comments: 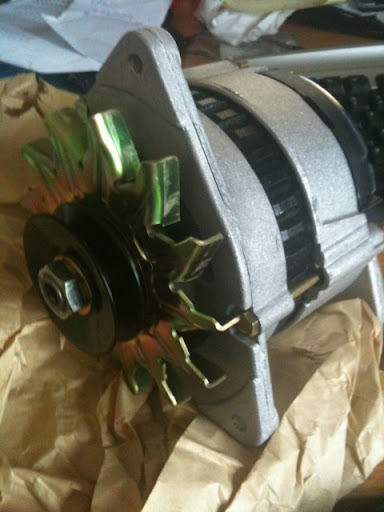 So this is the new Alternator for my Land Rover Discovery 200tdi bought from my local Alternator and starter motor shop. It cost £55 brand new unused.

So the Alternators from the carbreakers online cost £40 plus carriage. With a 90 day warranty. So that's gotta cost about 50 quid or more with the carriage.

So why buy a scrapper when you can buy new for about the same price.

So I went into Halfords in Plymouth City Centre to buy a new belt for the alternator. But left after a few minutes figuring that if the guy on the till cannot workout how to use the till to find the correct belt any advice or help I was going to get would be suspect. And this isn't a new till guy. He's been there a long time but the till was still beating him. Then in the middle of serving me he started to help someone else.

Now I want to fit the Alternator I'll take pictures and post them here
Posted by Rob Burton at 3:41 pm No comments:

Yes I did, I did it I bought a Landrover Discovery 200tdi with my own money, nobody forced me. I just blooming well did it!

I did it because I was pining for my old land rover like a Norwegian blue pines for the fiord's. And it was a cheap bargain O'Bargain.

A picture will be posted later of course, because at the moment all I have is a picture of the Alternator.

O well if you do really want to see the Land Rover part by part here's the alternator. 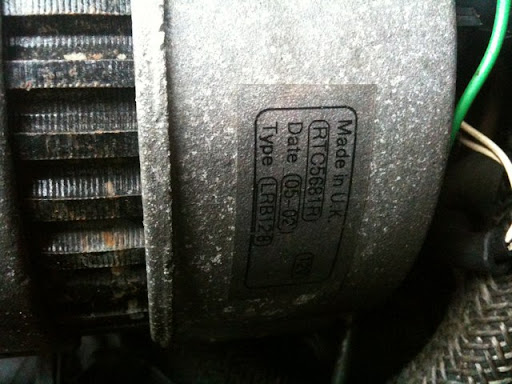 Tomorrow - the new Shock Absorbers, they're green and they are MEAN!

Yes I bought a Landrover Discovery 200tdi J reg (1991) the last Disco I had had to be sold to finance the D.I.V.O.R.C.E. and to keep the solicitors in Porches and Ferrari's for doing next to no work. (And nice work if you can get it I might add - much better than having an 'ology like me(

And it was cheap. £400! with tax, mot and off road wheels and tyres extra as well as the full set (5) of alloys. Diesels not smoky and runs great, leather seats. The inside trim is a bit ropey and mucked about with, the indicator indicator(?) is not working, but other things seem to be.

Its been lifted 2 inches and has front front protection things on it an all.

Of course the Alternator needs replacing but still that's only £55 new from the local Alternator shop.

So here start the adventures of Dr. Rob and his Red Land Rover.