The tadpoles in the garden
Are turning into frogs
The sun is shining
It’s too hot for dogs
The fruit trees are blooming
The country it is parched
Who could believe it?
It’s still only March
The sky is a deep blue
They’re swimming in the sea
People wearing shorts
And sipping cream tea
The weather is delightful
The sunshine is so hot
I gotta put a hat on
Before I lose the plot
It’s hotter than Venice
It’s hotter than Spain
The headlines in the papers
Make that plain
It’s hotter than Greece
It’s hotter than Rome
Who needs a holiday?
When you can stay at home
So I’m sitting in my garden
I’m watching bees buzz
I’m listening to the flowers grow
The dog just does
The fruit trees are blooming
Pink petals in the sun
I’m doing nothing
Just listening to the hum
Ommmmmmmmmm……… 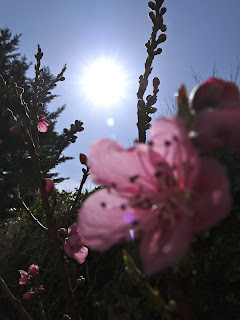 I have just submitted this article to an american pet magazine.  Theres no money in it or even a prize if one gets published. But I thought now I'm back from China I had better get this blog going again.  Some of you who know me might remind me what my Cocker Spaniel was called because for the life of me I can't remember, isn't that sad?  So I've named him 'Barney' for the purpose of this piece.

It was a sunny Sunday in May and I was taking tea on Plymouth Hoe. The Coffee Shack was, and still is, one of my most favourite places in the whole world.  Located on West Hoe in Plymouth one is able to dawdle over tea and look out over the spectacular natural harbour that has seen seafarers from Drake to Darwin sail away.
However, on that day in May, I was alone and was feeling in need of some sort of friendly company so I decided to leave my sunny spot and head off across town to see my friends Mandy and Dave.  I was surprised when I reached their place to be greeted at the door by not one Jack Russell but two!  I knew my friends had Toby the diminutive wirehaired scamp that lived with them, but they had increased their family by one with Molly, a friendly shorthaired Jack.
My surprise and astonishment at being met by two very friendly dogs jumping and wiggling around my feet was increased when I was ushered into the kitchen to peep into a cardboard box where 6 little pug noses were being pushed out to greet me with little yips of excitement. Mandy and Dave beamed at me.
I should have been more aware!
Well, of course, everyone loves a newly born puppy and I am no exception. I had owned dogs in the past but having lost my last two dogs somewhat tragically I had not renewed my relationship with mans best friend.  My last two dogs had been faithful companions. Rosy was an English Springer Spaniel of advancing years I had saved from certain death when her former owner had announced he was leaving the country; she was ensconced on the settee, in front of the fire, that very evening.
Barney was a Blue Roan Cocker Spaniel from good stock that I had from a puppy.  As he had such good, prizewinning parents, I had decided that I would enter the dog into various shows and see how he did.  I thought that this would probably be a good and new hobby that would get me out and about, meeting new people, and of course I knew I had a ‘good’ dog so it might be fun too.
Living and working in Cornwall is a wonderful place to have dogs. There are so many places one can go and with Rosy and Barney I took full advantage until one day I noticed that old Rosy was making heavy weather of her usual walk. Springer Spaniels are full of energy and just want to work. She would always be ahead of me, quartering the ground ahead; doing what she was bred to do, flushing game.  But now she was panting and lying down every few yards, not a happy dog at all.
That week I took her to the vet as she just didn’t improve so she clearly wasn’t just under the weather.  It was bad news. Her heart was failing. The kindest thing was … unspeakable, but it was done. I was distraught.
Within two days, my young energetic Cocker Spaniel was showing symptoms of something; he was lethargic, off his food.  Pining for Rosy we thought.  But he got worse.  More visits to the vet. The vet was nonplussed.  Barney got more and more ill. The vet diagnosed a blood problem and even used his own dog to provide blood for Barney. But to no avail.  Ten days after Rosy had gone, so too was Barney gone.
The house was empty of dogs; except for the phantom dogs I could hear jumping off the beds upstairs.  There was no one to eat my apple cores where once upon a time two pairs of bright eyes were locked on my every movement whilst I ate the apple.
Now two new pairs of eyes were locked onto mine.  Two bright sparkly eyes, attached to a friendly little face, a button nose and markings that gave her kohl around the eyes and huge eyebrows – a seductress! I still wasn’t sure I wanted a dog. I hadn’t had a dog for years.  I worked in an office for goodness sake.  Mandy and Dave were teasing me, goading me on. But I still wasn’t sure.  Yes, we all love puppies and the one that was cuddled in my hands was no exception. And yes she was very beautiful.  But what was that? She was born on March 4th?  But that’s my birthday too!
‘Oh go on then’ - it was obviously meant to be.
I still sit on Plymouth Hoe in the sunshine, drinking tea, looking across the beautiful harbour. But now on my lap, sharing a biscuit, is Snooks, my constant companion.
..................................
Just adding the photo for illumination and extra interest 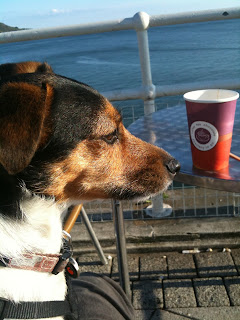 Posted by Rob Burton at 1:12 pm No comments: